> Roeselare is a  city and a municipality (including Beveren, Oekene and Rumbeke) in the Flemish province of West Flanders in Belgium. The business parks of Roeselare were chosen because of the heat map 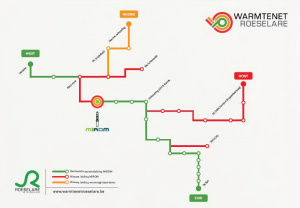 > Lichtervelde is situated north of Roeselare. Lichtervelde signed the ‘Covenant of Mayors’ and BISEPS will be an action in the ‘Sustainable Energy Action Plan’.

> The canal Roeselare-Leie is a man-made waterway between the city of Roeselare and the Leie River. Following the canal one passes the cities of Roeselare and Izegem and the municipalities of Ingelmunster, Oostrozebeke and Wielsbeke. The city of Meulebeke was included in the living lab because of energy-opportunities detected in a former Interreg NWE project ARBOR.

All chosen cities and municipalities in the living lab locate several business parks of which the biggest are located nearby the canal. Large multinational groups own various plants in the area, even though a lot of SMEs are present too. This combination and the fact that a lot of them are energy-intensive offers great opportunities on energy synergies and renewable production, for instance by using the common sources of excess heat and heat from combined heat and power (CHP). The city and municipality councils are committed well to support all kind of companies offering a good collaborative starting base for the BISEPS-project. 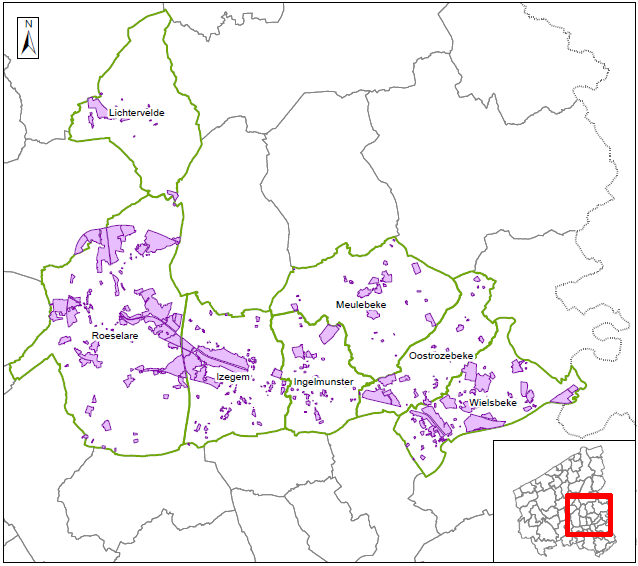 The businesses located in Wielsbeke/Izegem are principally very large natural gas and electricity consumers although there are some business parks with SMEs. Based on the information gathered during the initial conversations, following opportunities were found:

The business parks in Roeselare have a mixture of old and new businesses including many SMEs. There is potential for PV, but a direct wire connection would need to be approved by the energy regulator VREG and cross the road.

In addition, more than 10 companies have shared their energy data to investigate sharing heat (and electricity). A first project is a short high temperature heat network between 1 supplier of waste heat and 1 consumer, a brewery. The long term plan is to build a second heat network from the brewery with lower temperature to supply a new development of houses and apartments, as well as the public facilities in the neighbourhood. Also in the long term the high temperature link could be extended to other companies.

The results of the feasibility study are fitting in the road map of the city of Roeselare to be sustainable by 2050, which features district heat networks. This case is a great example of how an initial project facilitates further developments.

The business park at Lichtervelde is a typical small business park with many SMEs. There is low potential for a heat network, the main opportunity is PV installation. Until 2020 Flanders operated a net metering rule for PV systems under 10 kWp so the advice to many of the businesses was to limit the size of their systems and then enjoy seeing their electricity meter going backwards when power was being exported.

One company with a large electricity demand was interested in solar panels, but could not invest themselves. For them, a third party investor was involved.

Main constraints are the roofs are old and need to be renovated, some may contain asbestos , others are not strong enough for the weight of regular solar panels. WVI unburdened 8 companies with solar PV.